TRACIE HOTCHNER: A HAPPY ENDING FOR A HOMELESS LADY AND HER DOG 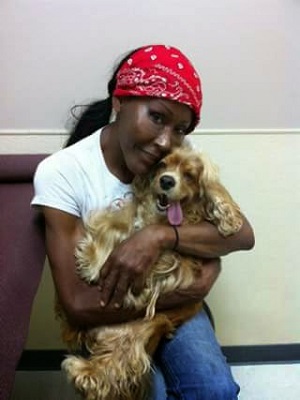 The recent inaugural Dog Film Festival in New York City gave me and the audience many opportunities to look at the human-canine bond from different perspectives. Many of us treasure and value our connection with our dogs and cannot imagine life without them – but for most of us, they are a part of our life, not our whole life.

However, for some people, their dog is their whole life- the only meaningful relationship they have. In very hard times, when people have lost their way of life and their dwelling, a dog may actually be the only sense of family and home that they have left.

One topic that has often haunted my thoughts is the plight of people living on the streets with their dog as their companion, having to fend for the both of them against all odds.

I was hoping that in finding material for the Dog Film Festival I might come upon a quality depiction of this very special version of the “remarkable bond between dogs and their people,” which is the theme of the Festival.

Sure enough, I had the great good fortune to receive a submission called “Myra & Prince,” which turned out to have been part of a fascinating film exhibition in Los Angeles at the National Museum of Animals and Society called “My Dog is My Home: The Experience of Human-Animal Homelessness.” It was made by Christine Kim, a social worker who specializes in homeless people bonded to their pets. And what a great job she did telling the tale of one lady’s plight.

The Myra of the title was a Las Vegas showgirl, an elegant statuesque woman who had rescued a puppy from a drug dealer on the street and named the pooch Prince. Little did she know that circumstances would change and she would one day become homeless herself. When this happened, Myra refused to enter the refuge of a shelter because they would not allow her dog in with her, so they slept in parks until better fortune came along.

Once she was invited into a shelter in Los Angeles that did permit pets, with the help of social workers and others she received housing assistance and put her life back together, never letting Prince be far from her side. She even added another little puppy that turned up in her neighborhood and she named him Happy, which made perfect sense because that was the way her life was turning around!

The delightful news I was able to give her after the Dog Film Festival was that our sponsor Halo, Purely for Pets had a very happy-making surprise for Myra. They followed up their donation of 10,000 meals to the Festival beneficiary, Bideawee (New York’s oldest shelter) with the gift of a year’s worth of food to Myra for Prince and Happy! It was a perfect ending to a heat-warming experience for all! And when the Dog Film Festival goes to Los Angeles mid-June 2016, Myra will be there in person with Happy and Prince at the Pooch Tea Party, basking in the congratulations.

She is also a renowned pet radio host and producer, having spent 7 years on the Martha Stewart Channel of Sirius/XM with CAT CHAT® and even longer with her award-winning NPR radio show DOG TALK® (and Kitties, Too!) that continues to broadcast in the Hamptons and the Berkshires. Her most recent accomplishment is the pet talk radio network she has created on the Internet called The Radio Pet Lady Network.