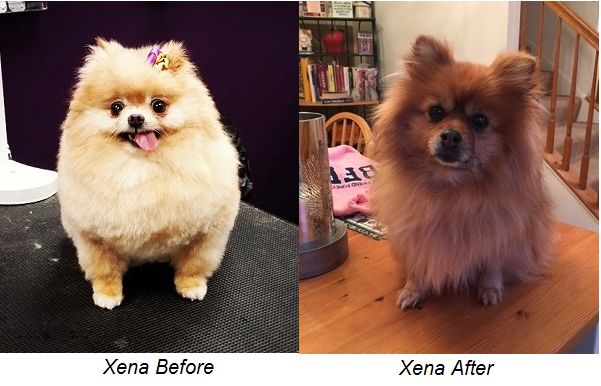 When we welcomed a darling little Pomeranian named Xena into our challenge she was not an obese doggy – just a chubby one. Luckily, her people John and Pam knew that they had let her tip the scales in the wrong direction with too many treats but they had not been able to figure out how to get the weight off.

Dr. Donna asked John to fill out the very comprehensive questionnaire she has developed, along the lines of human weight loss programs that require people to write down every single thing that passes their lips, and calculate its calories.

Donna put Xena only on canned food – ½ can of Halo’s Spot’s Stew morning and evening – which she ate with gusto. She got a ½ cup of raw green beans or green peppers as in-between-meal snacks when she seemed hungry. John soon realized, “The biggest issue was to get the whole family on the same page of giving no table scraps or extra treats”.

Before long, she no longer begged at the table because nobody was feeding her off their human plate anymore! They fed her right before they sat down to dinner and offered her a little chew bone while they had their meal, a “positive reinforcement” so stay on her bed and not under their table!

The weight came off at a pretty regular one ounce a week – a remarkable achievement for a dog weighing not much more than a dozen pounds to begin with. As the successful weeks added up, Xena’s family was “positively reinforced” in sticking to her dietary program.

Before long they realized that she seemed more playful and energetic. They could start to feel her ribs under her luxurious thick Pom coat and her tummy was starting to tuck up. More than two months into the 3-month challenge, they took Xena to the vet for her semi-annual comprehensive exam (double hurray for John and Pam for making that part of their care of Xena because too many people with aging dogs neglect these important twice-yearly wellness visits).

“The staff was blown away by how great Xena looked!” John reported. “She was the lightest she had been in 5 years. When I showed the vet the weight-loss program Dr. Donna had developed for Xena, they were impressed. They were familiar with Halo and said it was great food. They said that Xena was at her ideal weight and we need now to maintain it.” John added a word of thanks to Dr. Donna and our show: “Thank you again for helping us transform Xena! We could never have done this without your help and support.”

So I guess it’s fair to say that Xena is a Halo spokes-model now! I hope she doesn’t begin to act like a diva. But if you see how darling she is in this photo, maybe she’s earned the right?!