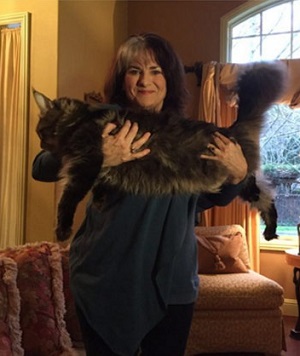 Mr. Spock the cat suffers from a severe case of mistaken identity.

As he innocently lounges in front of his home’s front window, watching the world go by, he alarms people. That’s because he’s four feet long and looks like a wild bobcat.

Animal Control has also been called several times to check out the situation.

“One person chastised me for having a wild animal in the house, saying that they thought it was a bobcat,” Pizarev told the San Jose Mercury News. “I said, ‘Look, there’s a tail, it’s not a bobcat. Trust me, it’s a regular cat.’”

But now most neighbors know that it’s just Spock, an extremely large housecat. Spock is a Maine Coon, which is the largest of the domestic cat breeds.

Spock measures almost 4 feet long and weighs 27 pounds. Pizarev says he eats more than a pound of food each day.