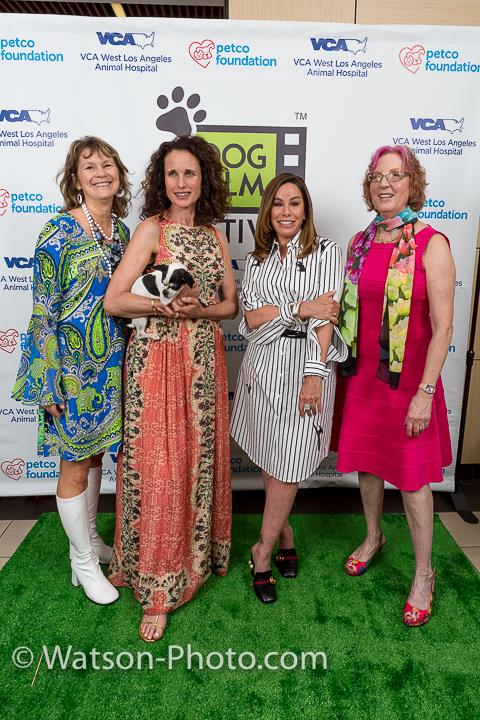 The first stop on the Dog Film Festival national tour was a huge success!

I am over the moon with excitement over how great the Dog Film Festival launch went this past weekend in Los Angeles. Seems like the whole town turned out to celebrate the chance to come to a tea party and the movies with their pooches – all dressed to the nines!

Kicking off a 12-city tour, the Dog Film Festival—made possible by a grant from Petco Foundation and with continuing sponsorship from our founding sponsor, Halo Purely for Pets —screened at the Crest Westwood Theater on June 5, with the Afternoon Tea Pooch Party held the day before at VCA West Los Angeles Animal Hospital.

Our beneficiaries – Downtown Dog Rescue and the Lange Foundation – were grateful to receive 50% of all the ticket proceeds, as well as a donation to each of them of 10,000 Meals from Halo, in partnership with FreeKibble.com and GreaterGood.org.

The Afternoon Tea Pooch Party drew an amazing crowd of fancy pooches and their elegant people, including celebrities Andie MacDowell, Katie Cleary, Madeleine Wade, and teen actor Lou Wegner (the Dog Film Festival’s Youth Ambassador). All of them in addition to the star of the party – my goddaughter and the Honorary Hostess of the tea party – Melissa Rivers. The Festival is dedicated in loving memory to her mother – my godmother Joan Rivers – and Melissa spoke eloquently about the love and comfort dogs give all of us, as her mother’s dogs did for her, even at the end of her life.

Guests enjoyed getting their photos on the Green Carpet in front of the Step & Repeat and ogling the incredible canine costume designs by Lola Teigland of Couture d’Chiens.

As part of Petco Foundation’s “Think Adoption First” platform, the Lange Foundation had adoptable dogs at the party, at least two of which may have found forever homes as a result!

Patrons who attended the film screenings were encouraged to bring their dogs with them into the theater and boy-oh-boy – did they ever! It seemed like nearly everyone had a dog along for the experience. There were two nearly matching enormous gray and white pit bulls, who were beautifully behaved (even when confronted by yappy smaller dogs!) and were fabulous ambassadors for their breed (as the Majority Project PSA message on screen brought home).  It was so much fun to see them stroll the Green Carpet, and to have their photographs taken in front of the step and repeat. You can imagine that every time a dog barked on screen, the canine audience joined in!

There was especially the lovely coverage from The Insider, led by animal welfare advocate Louis Aguirre, who interviewed Melissa at length privately and did some great interviews with myself and Susanne Kogut, the President of the Petco Foundation (who immediately embraced the Festival with a generous grant because she believed in the power of the Festival to promote love and togetherness between dogs and people). and of course he talked with Andie MacDowell, Katie Cleary and Lou Wegner.

Next up, we will be traveling to Seattle on Sunday, June 26. I can’t wait to see you there.