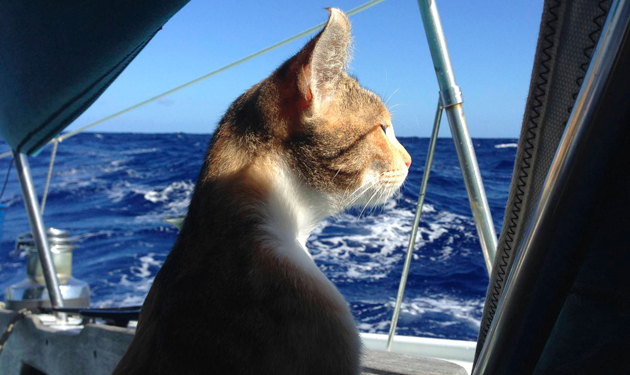 Liz Clark has been on an incredible adventure since 2006 – sailing around the world on a Cal 40 sailboat, solo. That is, solo until 2013 when she was joined by an unlikely co-captain – a feral cat she adopted and named Amelia.

According to Clark’s online chronicle, the former bartender has traveled along the western coast of Mexico and Central America, and around the South Pacific.

Amelia was just six months old when Clark found her. The feral kitten was skinny and starving for attention and Clark immediately took to her. She says she saw a  “commanding lioness air and carefree bravado” in the little cat.

Amelia (also known as Tropicat) seems happy on the boat with Clark. “She has adapted to living surrounded by water,” Clark told Buzzfeed. Amelia loves watching the fish and birds and Clark made a cat tree out of a yoga mat wrapped around the boat’s mast and finds loose palm leaves make great toys for her little companion.

Read more about Liz and Amelia the Cat’s adventures.