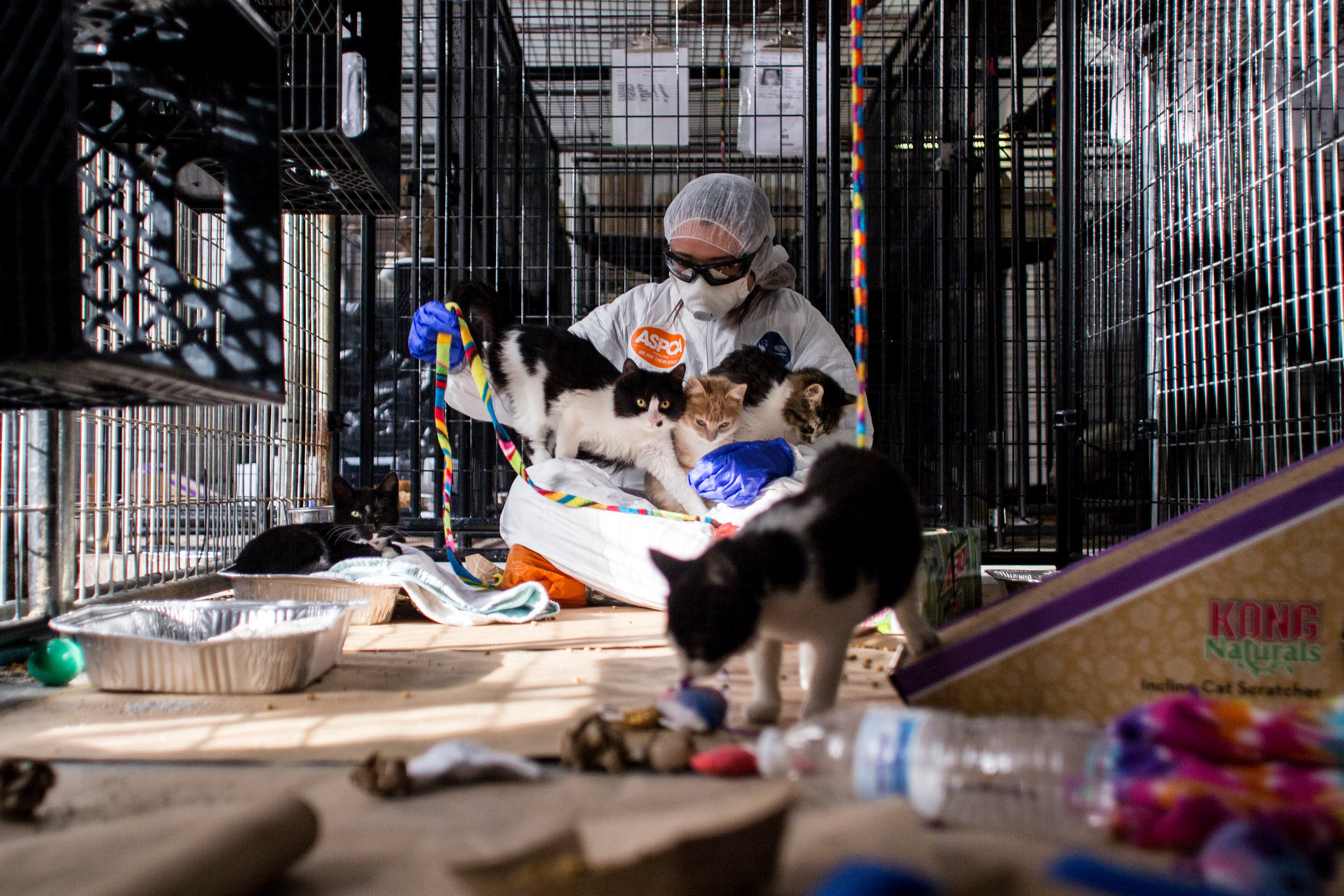 After a mysterious outbreak of bird flu swept through New York City shelters earlier this month, the American Society for the Prevention of Cruelty to Animals (ASPCA) opened an emergency quarantine center to house the entire cat population in the city’s shelter system, according to The New York Times.

Some 500 cats are calling an industrial warehouse in Queens home, while shelters are decontaminated. So far, 386 cats have tested positive for the virus, a mild form of flu strain H7N2, last detected 10 years ago in poultry-market birds. The virus has never before been seen in cats.

The quarantine center opened at the end of December 2016 after a cat named Mimi in the East Harlem shelter fell ill with a respiratory infection that turned to fatal pneumonia. Preliminary tests revealed that Mimi had a canine influenza virus, H3N2 – but the veterinarian thought that couldn’t be possible. Cats were catching the flu like crazy – in shelters as far away as Brooklyn and Staten Island – but the dogs seemed fine.

Further tests identified the virus as H7N2, the bird flue virus, which is not usually life-threatening for cats. Symptoms include runny nose and eyes, congestion, coughing and lip smacking. It is slightly transmissible to humans and causes mild illness, according to the federal Centers for Disease Control and Prevention.

But an unfamiliar disease in a new population is a loud warning bell to health authorities. Thus far, the outbreak has been the largest influenza contagion observed in cats.

FROM NEAR AND FAR

Professional animal-crisis workers have come to Queens from all over the country to help out. Workers must wear protective clothing, goggles, a respirator mask and latex gloves when treating the cats. One the veterinarians handling the first cat did come down with the flu, meaning this has become a zoonotic (cross-species contamination) concern.

The infected cats are recovering, but none can leave the quarantine until they have been given a clean bill of health. In the meantime, some cats are still having a good time in the facility.

An ASPCA field investigator described the quarantine center as pretty quiet during the day. “But they have a nice ruckus overnight,” Tim Rickey told The New York Times. “We come in and the place is destroyed.”

If the idea of animals quarantined in the city sounds like something out of a novel, well, that’s because it is! Neil Abramson’s novel Just Life centers on the story of a vet who mobilizes allies to save dogs infected by a virus and placed in quarantine by the National Guard. Please listen to my conversation with Neil about it this weekend on DOG TALK (and Kitties, Too!) – which will be podcast next Tuesday. To be sure you receive every week’s DOG TALK podcast on the e-newsletter, please SIGN UP for it.

Here’s hoping the cats get better soon and find great homes – and that frightening disease outbreaks remain on the pages of great books.

Tracie Hotchner is a nationally acclaimed pet wellness advocate, who wrote  and THE CAT BIBLE: Everything Your Cat Expects You to Know. She is recognized as the premiere voice for pets and their people on pet talk radio. She continues to produce and host her own Gracie® Award winning NPR show DOG TALK®  (and Kitties, Too!) from Peconic Public Broadcasting in the Hamptons after 9 consecutive years and over 500 shows. She produced and hosted her own live, call-in show CAT CHAT® on the Martha Stewart channel of Sirius/XM for over 7 years until the channel was canceled, when Tracie created her own Radio Pet Lady Network where she produces and co-hosts CAT CHAT® along with 10 other pet talk radio podcasts with top veterinarians and pet experts.

Tracie also is the Founder and Director of the annual NY Dog Film Festival™,a philanthropic celebration of the love between dogs and their people. Short canine-themed documentary, animated and narrative films from around the world create a shared audience experience that inspires, educates and entertains. With a New York City premiere every October, the Festival then travels around the country, partnering in each location with an outstanding animal welfare organization that brings adoptable dogs to the theater and receives half the proceeds of the ticket sales. Halo was a Founding Sponsor in 2015 and donated 10,000 meals to the beneficiary shelters in every destination around the country in 2016.

One thought on “Cats In Quarantine”