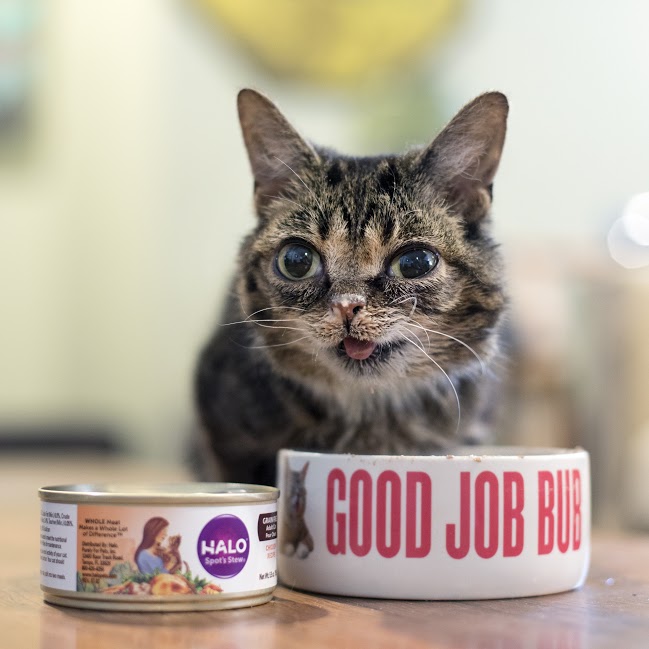 Often called “the most amazing cat on the planet,” Lil BUB has become such a superstar in social media that I’m proud to have been aware of her years ago when I interviewed her human, Mike, in September of 2013 on my show CAT CHAT® about their lovely book, “Lil BUB’s Lil Book.” HERE’S that interview. Mike was the co-author of the book and has been the constant companion to this sweet little special needs kitty. He was told when he adopted her that her chances of a full life were slim. He didn’t care: he loved her sweet little face with her sticky-out tongue and her loving disposition.

Now all these years later they are going strong as a remarkable public pair of feline celebrities, showing up to encourage all good things for cats, especially adoption.

I was pretty excited to learn that Lil BUB has partnered with a pet food company for the first time ever, which was announced at CatCon. And that company is Halo, America’s best-loved holistic pet food! You probably already know that Halo is the company I’ve chosen for the only kibble I’ll feed my own dogs – and now even more so, because their new formulations go a step further they Halo is sourcing their ingredients exclusively from non-GMO farms and using only certified humanely raised meat ingredients.

I thought I’d share this sweet, genuine video Mike made to explain why he chose Halo to feed his little girl.