Interrupt “Bad” Behavior With A Reward! 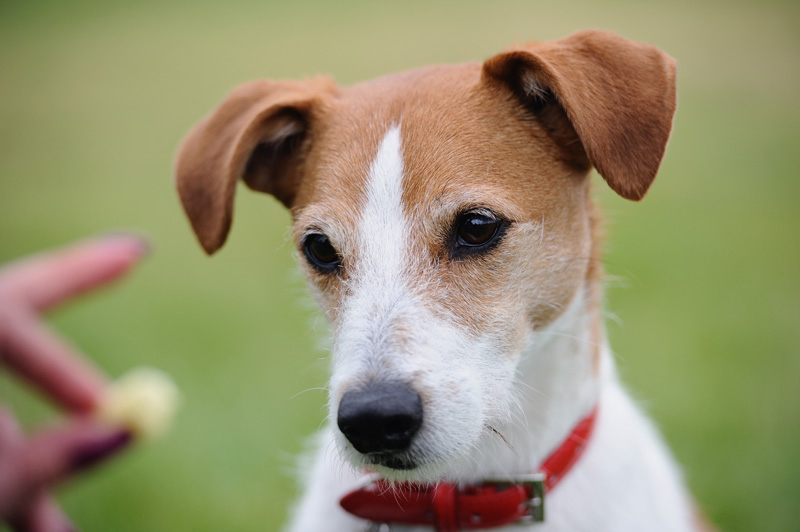 We have all heard about ways to stop your dog from doing something we don’t like by basically “snapping him out of it,” using various methods of distracting him from his shenanigans.

There’s the squirt bottle that often comes up as a supposedly harmless intervention. Some trainers suggest that if you have a really stubborn dog who seems insensitive to the squirt of plain water that you put some lemon juice in the water so it stings a little if it gets in the dog’s eyes or mouth.  In theory you’re supposed to squirt the dog at the moment she’s doing the unwanted behavior and it stops her – although in truth even if it does cause a pause in her efforts to dig up your rose garden, there’s not any lasting effect. She might even find it refreshing as then return to her excavation. This means that you have to pretty much grab her by the collar and pull her away from the garden, which you could have as easily down without the squirt bottle!

There’s the shake can of pennies, which many trainers make themselves from an empty can filled with a handful of coins and duct tape over the open end. The owner is supposed to give this can a vigorous shake toward the dog at the precisely-timed moment that coincides with the dog embarking on the behavior – like jumping up on a visitor. In theory, the shake can sound will startle him and take his mind off the task. In truth, I’ve never timed it well or had the pennies inside make enough of a clatter to “scare a dog straight.”  It usually results in a withering look from the dog when he realizes how inept I am at getting across my wishes.

A big ring of door keys is another tool espoused by some trainers. They suggest having handy a ring of keys you can throw in the dog’s general direction when you want him to stop chasing the cat, for instance (although it probably scares the cat more than the dog and makes them both go even faster).

I guess you could say these interrupters fall into the category of “positive” training, because they are presumably not cruel or harmful, intended only as interrupters of the dog’s shenanigans, without being harsh. However, if the interruption doesn’t happen,then it’s harder on the dog, who is baffled by what you want and then gets subjected to angry frustrated words from you. In my view, it’s unfair to the dog because he doesn’t really absorb the message you’re trying to get across.

So here’s a novel idea: how about changing what your dog is doing by calling him to you with a delicious treat? It has to be an extra delicious treat – you can’t just have a dog biscuit! The treat has to be better than the pleasure of the behavior he’s exhibiting and you’ll get the same effect as harsher tactics – your dog stops his behavior to come to you. And you get an opportunity to be the benevolent leader, reliable dispenser of All Good Things!

The treat needs to be bits of hot dog, cheese or one of the pure protein freeze dried treats that creates joy in your dog’s mouth! You need a super yummy treat to get their attention focused on you. And give a few treats in a  row, a real jackpot to make listening and coming to you – even when highly distracted – an enjoyable choice.

Here’s an example: my girls Maisie and Wanda play extremely rough between them – slamming into each other at full tilt like rugby players, their jaws snapping the air like castanets. I know they’re having a grand time, but I worry their adrenaline levels will go too high and they’ll lose their self-control and hurt one another. They are each more than 80 lbs of pure muscle. Maisie goes at Wanda from behind and tries to bite her back legs out from under her. Wanda launches herself at Maisie with such force their ears fly up in the air.

I used to yell at them to try and get them to stop – wave my arms frantically. I’d even tried a shake can, but they were oblivious. However, because I always have a pocketful of Halo’s Liv-a- Littles when i go out with the dogs (for insurance that they will always come when I call out that word) they know that what comes out of the right coat pocket is reliably delicious. “Hey girls!” I call out in a happy voice as they are knocking each other over in the snow – and I hold out two chunks of dried beef right as they are knocking into each other. “Here!” I call out cheerfully (not in a scolding or frantic tone) and they stop what they are doing to grab their morsel. Then I feed them a few more pieces (I’ll often put different Liv-a-Little proteins in one pocket for the delight of variety),to reinforce the belief that all good things come out of my right pocket! But also to take their minds off what they had been doing.It’s all I need to do to break the spell and point their attention in a different direction. get them to chill out.

A friend who saw me do this misunderstood and asked why I was “rewarding bad behavior” with a treat – but the reward is actually for stopping what they are doing for paying attention to me – which is the best reward of all!