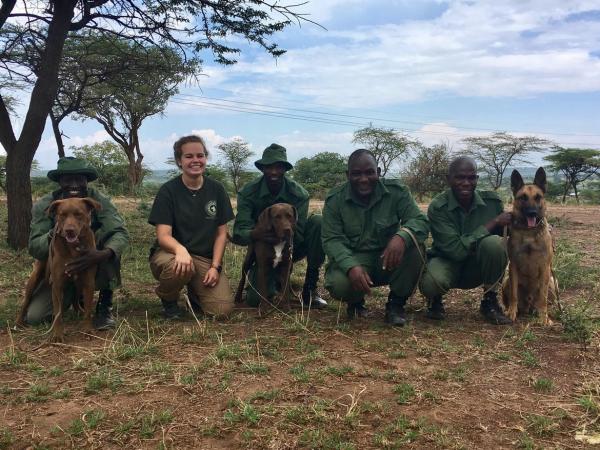 We all know that poaching is a huge problem that needs to be stopped. According to the World Wildlife Foundation (WWF), “ivory poaching has reduced the elephant population in Tanzania’s oldest and largest protected area by 90%” in the last 40 years alone.. Karin Wagemann is one of the dedicated people working to stop that trend – with a little help from some four-legged barking friends!

“Training dogs, that’s always been easier for me,” Karin told The Spokesman-Review. Karin is an American Society of Canine Trainers instructor but some of her most impressive dogs are in Tanzania, not America. So far she has trained four anti-poaching dogs and returned to Tanzania in January to continue working with six Tanzanian handlers dedicated to protecting the elephants of Tanzania.

The four dogs are former rescue dogs from America named Tony, Popo, DJ, and Radar. They know how to detect hippo teeth, ammunition, rhino horns, and ivory from elephant tusks. The handlers are game scouts with the Grumeti Law Enforcement Division. Despite a language barrier, they made their love for the dogs clear to Karin.

“They really care about the dogs and have shown care I haven’t seen anywhere else,” Karin said. That helped compensate for the human language problems. They worked together for two months on canine management as well as advanced detection and tracking before the handlers worked on their own for eight weeks while Karin returned to the United States. Looking back, “I couldn’t have asked for a better group,” Karin told reporters.

Once the group is done with training, they will work with the dogs at roadblocks to detect and halt transport and trade of illegal animal goods. The dogs are not attack dogs though. “They’re not aggressive,” explained Karin. If they detect a smuggled item, they “sniff you out and think you have a toy for them.”

Karin loves working with protection dogs and helping fight poachers. Karin told reporters, “I have known I was going to this [vocation] for a long time” before adding that it is “the best job ever.” Karin’s work with the dogs isn’t just helping elephants. The WWF notes that poaching also harms local communities who depend on tourism for their livelihoods. The tourists come to see the animals, so if the animals disappear, the tourists will, too.

Halo’s mission includes our belief that each and every animal impacts our lives and ultimately plays a role in improving our collective well-being. Because of that, we’re actively challenging the long-held one-way view of animal management (purely for human benefit) for one where we take care of each other—people, animals, and planet. We applaud the dogs and people working together to prevent poaching and take care of our planet. Those are some good dogs who deserve great treats for their amazing work.