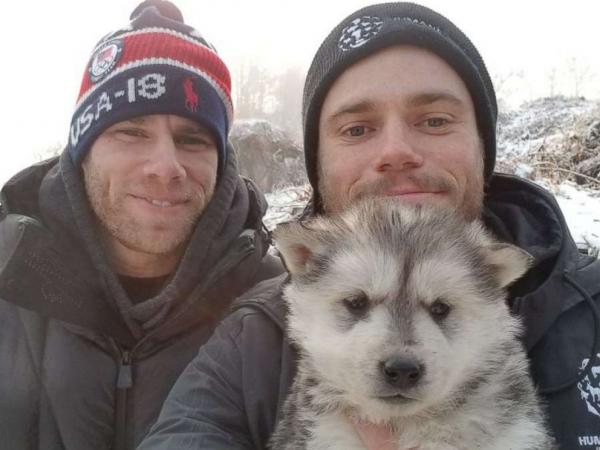 Gus Kenworthy is known for being an incredibly skilled skier. However, he has won the hearts of many for his love of animals and dedication to using his fame to help animals in need. According to the Humane Society International, while Gus was in PeyongChang for the Olympics, he also took the time to visit a dog meat farm in South Korea where he helped rescue almost 100 dogs!

The HSI reports that eating dogs “is unpopular with young Koreans” but there are still an estimated 2.5 million dogs living in awful conditions on roughly 17,000 dog meat farms in South Korea. Gus wrote on Instagram that “it’s not my place to impose western ideals on the people here,” but that the “way these animals are being treated, however, is completely inhumane and culture should never be a scapegoat for cruelty.” He and HSI also understand that you can’t simply tell people to stop engaging in a problematic economic practice, without introducing something more sustainable.

In this case, the farmer of this farm has worked with HSI and will now grow mushrooms for food, rather than breeding dogs. It’s a win-win for the dogs and for the farmer. The more than 1,200 dogs HSI has rescued over the past three years have better lives with families in the United Kingdom, Canada, and the United States. The farmers have new livelihoods that are not only more sustainable, but more humane. Gus shared that he thinks “it’s a very practical solution to a highly emotive problem” and helping the farmers as well as the dogs.

One particular dog from Gus’s visit is especially lucky. He’s a little pup that Gus named Beemo. Gus and his boyfriend, actor Matt Wilkas, fell in love with Beemo while they were helping HSI on the farm. Because of that, Beemo will be joining them as the newest member of their family! Beemo might not be gold, or even silver, but we bet that Gus prefers him to anything else he could have brought back from PeyongChang. In return, we’re sure that Beemo is grateful to his new dads. We hope Gus and Matt are continuing to stand up for the humane treatment of animals by giving Beemo Halo dog food and treats. Halo proudly displays the logo of the Humane Society of the United States (sister organization to HSI) on our packaging. In addition to supporting the HSUS Animal Rescue Team, we also support the All Animals mission of HSUS by working to make sure all animals are treated humanely. If we gave gold medals, we’d definitely give one to Gus for being a true hero for animals.