Climate Change and Your Cat – How Can You Help? 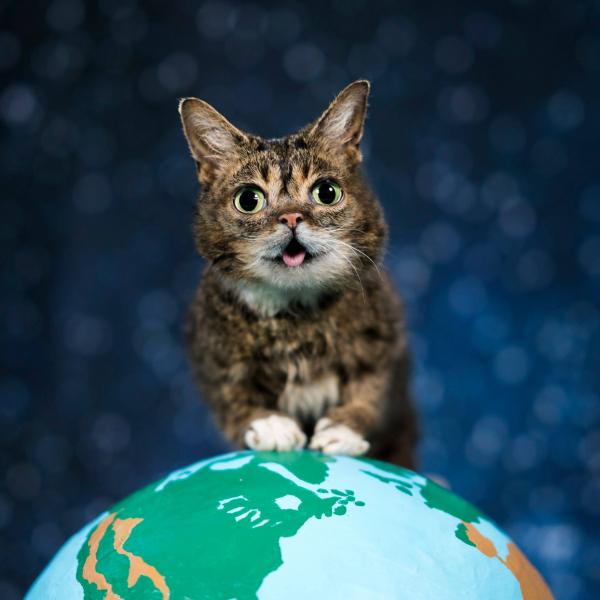 On Earth Day 2018, Lil Bub thanked Halo “for exclusively using humanely sourced protein from free-range sustainable farms,” adding, “It’s good for our pets and great for our planet.” Halo was proud to read Lil Bub’s kind words. As a mission-driven brand, Halo works hard to do what’s best for pets, people, and the planet. We’re no stranger to accolades for that work. In 2016 our Spot’s Stew won in the Best Pet Products, Food category of the Natural Child World Eco Excellence Awards. We were also finalists in the supplements and treats categories!

The accolades aren’t why we do it though. As Dave Carter, our Director of Sourcing, says in a Facebook video, “Nature’s kind of messy. Nature creates things that…are unique and individual and the more we learn to work within that system, those animals are helping to restore the soil. They’re helping to build a grassland that captures carbon and makes for a healthy ecosystem.” He added, “We just think that when you go back to that natural, that OrigiNative™ source, you’re getting a whole protein that’s healthier for us and healthier for our companion animals.”

Carbon capture is important. Jerry Melillo is an ecologist and a member of NOAA’s Advisory Committee for the Sustained National Climate Assessment. Jerry told Energy News Network, “It’s pretty clear that climate change is not going to stop and it will be accelerating if we don’t move to a reduced carbon economy,” Jerry told Midwest Energy News, when he spoke at last year’s annual meeting of the American Association for the Advancement of Scientists (AAAS).

We’ve seen some crazy weather over the past few years. As climate change continues, scientists say different types of extreme weather will become even more common. For example, some parts of the United States will see stronger and more frequent storms. Some areas will have more droughts and wildfires. Heat waves are also likely to become more common. How will all this crazy weather affect our beloved cats, and what can we do to help them – and ourselves?

Thankfully, Dr. Jason Nicholas, the Chief Medical Officer at Preventive Vet, took the time to talk with us about how these crazy weather patterns might affect our pets’ health. Dr. J, as he’s generally known, is passionate about pet health and helping pet parents better understand their furry friends.

We started by discussing the record-warm winter seasons that have been occurring, despite the late snowfalls that much of the United States has seen this spring. With warmer winters “the parasite seasons many people are used to or think exist are likely to change,” Dr. J explained. “So, ‘flea season’ is likely to start earlier and end later, and there may also be ‘unseasonal flares’ due to changing weather patterns. The same is likely for ‘tick season’ and even ‘intestinal worm season.’”

But seasons outside aren’t the only thing to think about, Dr. J said. Many of these parasites can thrive indoors and become hypobiotic — “sort of like a dormant/arrested stage.” As a result these parasites can be a problem for more of the year and make things worse.

Climae change could also lead to more infectious disease and mosquito-borne parasites. Mosquitos can easily spread diseases to cats. “From a mosquito standpoint, changing weather patterns isn’t just likely to mean longer and more erratic mosquito seasons, but it’ll also mean that places that haven’t historically had problems with disease-spreading mosquito populations are more likely to start having them.”

“Don’t forget, cats can also become infected by heartworms. They’re not just a dog problem,” Dr. J added. “In fact, it can take far fewer heartworms to cause significant disease in cats than it takes in dogs, and there’s no safe and effective treatment for heartworms in cats.” Fortunately, there are safe and effective steps to prevent heartworm infections.

In fact, in 2017 Dr. J wrote a blog post about mosquitos, heartworm disease, and cats. In it he warned that a single mosquito carrying a single worm is all that it takes to give a cat heartworm disease. Obviously keeping your cat indoors helps minimize the risk, but mosquitos can still get inside. He encourages people to do all they can to minimize mosquitos around their home. He also strongly recommends talking with your local veterinarian about the best heartworm prevention option for your individual cat based on where you live and any other parasites from which your cat or other pets may need protection.

In fact, Dr. J says talking with your veterinarian is the “biggest step” any pet parent should take in the face of these changing weather and parasite patterns. He suggests you ask about “the safest, most effective, and most comprehensive parasite prevention and treatment plan for all of the pets in [your] home,” including indoor-only cats.

With an increased risk of severe or more frequent storms, pets and their pet parents also face more risks for floods, fires, or other natural disasters. As with many parts of being a good pet parent, being prepared ahead of time is key. If you need ideas, Halo had a blog post about 7 Ways to Protect Your Pets in an Emergency just a few months ago. Dr. J also provides advice on putting together an emergency kit. People can download Preventive Vet’s Emergency and Disaster Prep eBook for free to get more ideas.

In addition to these specific steps to help your pet, you can also think about doing more to slow climate change. If greenhouse gas emissions can be significantly reduced, some of the worst impacts of climate change could be avoided. Toward that end, scientists are studying a wide range of plans for countries and different sectors of industry to take.

People can also do a lot to deal with their own greenhouse gas emissions and carbon footprint. Scientist Dr. Frank O’Sullivan of the Massachusetts Institute of Technology also spoke at the annual meeting of AAAS, “We don’t need one solution. We need a portfolio of solutions” for reducing greenhouse gas emissions. Choosing Halo for your pets can be part of that portfolio of solutions.

One way that many people, including Sir Paul McCartney and Oprah, enjoy reducing their carbon footprint through Meatless Mondays. Although cats are obligate carnivores who cannot eat a vegan diet, wholesome vegan food prepared especially for dogs can allow dogs to safely join in a family-wide Meatless Monday with Halo Holistic Garden of Vegan™ Dog Food kibbles or cans!

In fact, Halo, GreaterGood.org, and Freekibble.com are even working with select shelters to help reduce their carbon paw print through Meatless Mondays for the shelter dogs! They’re supplying both Halo Vegan and Halo Whole Meat food for the dogs in the care of Second Chance Animal Shelter in Massachusetts, Humane Society of Tampa Bay in Florida, and Dutchess County SPCA in New York. Since it’s not good for animals to have one day with a completely different diet, the dogs are achieving their Meatless Monday by having 1/7th of their food each day be Halo Garden of Vegan™ dog food.

All three shelters have reported that the process is simple and making the dogs very happy. Sheryl Blancato, executive director for Second Chance Animal Shelter said, “We are excited about being part of Meatless Monday and the Halo food donation has helped save the lives of many animals. Since foregoing meat even one day per week has an impact on the environment, imagine the difference with can make with all of the dogs at an animal shelter going meatless on Monday!”

Together we can make a difference for our planet so that cats and other animals can live their very best lives now and in the future. Halo is here to do our part to make that as easy as possible.