Whole Meat vs. Meat Meal: How to Spot the Difference in Ingredients 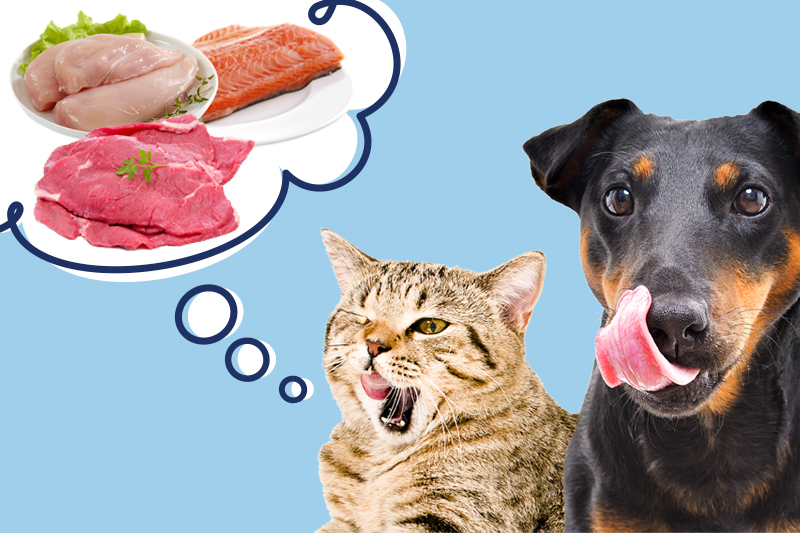 Whole Meat vs. Meat Meal: How to Spot the Difference in Ingredients

What’s in a name? Does it matter? Yes!

There are many ways to provide essential nutrients to pets, including a variety of protein sources. Most dog and cat foods contain meat from other animals – typically chicken, turkey, cattle, pigs or fish, though a number of other more exotic animals may also be used.

But what is meat? It might sound like a straightforward question, but the ‘meats’ used in dog and cat food aren’t necessarily the same kind of meats you would find in a grocery store or butcher shop. Humans who eat meat typically consume only the muscle tissue of the animal. While muscle tissues are reliably rich sources of water and protein, they do contain variable amounts of fat, minerals and vitamins, depending on their location on the body and the type of animal from which they were removed.

In the USA, pet foods are regulated by an agency called the Association of American Feed Control Officials; you may be familiar with seeing them referenced as AAFCO. Even the ingredients used in pet food are defined by AAFCO. They have a loose categorization of ingredients as being ‘major’ or ‘minor’. Meat is considered a major ingredient and often it will bear an animal name – this means if a product lists ‘pork meat’ on the label, it must contain flesh from a pig. If an ingredient list doesn’t include the animal name and just says ‘meat’, it can only come from cattle, pigs, sheep or goats. All other animals (e.g.: chicken, bison, venison), must be specified. This makes the ingredient easily recognizable to consumers. In comparison, minor ingredients are primary sources of minerals, vitamins or other nutrients and may not have a recognizable name. For example, alpha-tocopherol, a minor ingredient, is added to diets as a natural anti-oxidant and to provide the essential nutrient vitamin E.

By the AAFCO definition, “Meat” is:

The clean flesh derived from slaughtered mammals and limited to that part of the striate muscle which is skeletal or that part which is found in the tongue, in the diaphragm, in the heart or in the esophagus; with or without the accompanying and overlying fat and portions of the skin, sinew, nerve and blood vessels which normally accompany the flesh.

This description may sound familiar to the type of meat humans consume; this is the whole meat that Halo uses in their meat formulas. Meat as used in pet food cannot contain any bone, meaning it is most often mechanically separated from the bone, resulting in a finely-ground paste-like product, just like what is used in processed meats for human consumption (like hot dogs).

In comparison, “Meat By-Products” are:

The non-rendered, clean parts, other than meat, derived from slaughtered mammals. It includes, but is not limited to, lungs, spleen, kidneys, brain, livers, blood, bone, partially de-fatted low temperature fatty tissue and stomachs and intestines freed of their contents. It does not include hair, horns, teeth and hoofs.

Meat byproducts are raw ingredients and include only ‘non-rendered’ parts of an animal. The qualifier ‘byproduct’ means that it is not a part of the animal that is consumed by humans in the USA, and thus it is a byproduct resulting from the production of muscle flesh. Rendered products are those that have undergone a cooking process. Rendered ingredients are treated with high heat and pressure to remove most of the water and fat, leaving primarily the protein and minerals from the raw ingredients. Rendered products that are ground up into a powder include the term “meal”. Meat meals are not deemed fit for human consumption in the USA.

Rendered product from mammal tissues, exclusive of any added blood, hair, hoof, horn, hide trimmings, manure, stomach and rumen contents except in such amounts as may occur unavoidable in good processing practices. It shall not contain extraneous materials not provided for by this definition.

Unlike whole meat (or even meat byproducts), meat meal does not need to include the name of the animal(s) from which it is derived. If an animal name is voluntarily included, for example, ‘beef meal’, it can only include rendered meat from that animal. Because meat meal is a concentrated source of protein and minerals, there are strict guidelines on the level of minerals allowable, particularly for calcium and phosphorus, and the product must be labelled with the minimum crude protein, fat, fiber, minimum phosphorus, and minimum and maximum calcium levels.

Whole meat is a raw ingredient and has undergone no heat processing before being incorporated into pet food. This means, just like raw meats prepared for human consumption, they must be shipped from the slaughterhouse to the processing facility using cold storage. Transport and storage of whole meat requires the maintenance of cold temperatures to prevent bacterial growth and spoiling of the product. This is one reason you will typically find whole meat only in higher priced foods, as it costs more for the company to utilize these raw ingredients to make their pet foods. In comparison, because they have been cooked and ground to a powder, meat meals are comparatively light weight, can be stored in greater volumes for longer periods of time, and do not require cold transportation or storage. This makes them a less costly ingredient to use in pet foods, and it is why so many pet food companies choose to use meat meals instead of whole meat in their recipes.

Not only are the ingredient definitions regulated by AAFCO, but also the way the ingredients are listed on a product’s packaging. In the USA, ingredients on pet foods must be listed in decreasing order from most to least weight. Because of their water content, meat and meat byproducts are very heavy, as opposed to meat meals that are cooked concentrated protein sources. This means that foods containing meat and meat byproducts will often have them listed very high on the ingredient list, while foods containing meat meal may display that ingredient lower on the list, even if the total dry matter content may be very similar.

So, if you’re looking to spot the difference in ingredients on a pet food label, you can look for the word ‘meat’ and determine what species it is from. You can also determine what sort of processing it has undergone, with the presence or lack of the word ‘meal’. Meat meals have undergone heat and pressure processing resulting in a meat powder prior to being incorporated into pet food, while whole meats have not. Be sure to check your pet food labels!