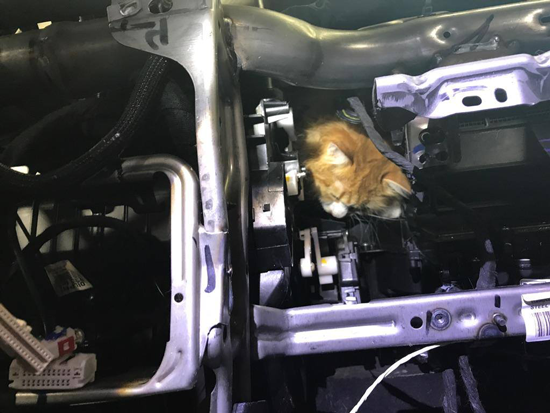 On April 12, the Albany Fire Department Facebook page shared a post from a local car dealer and repair shop, adding “Thank you Mark Thomas Motors for stepping up today and answering our call. We appreciate you.” The photos showed mechanics working on the dashboard of a car, a cat apparently stuck in that dashboard, and the same orange cat secured safely in a carrier.

According to The Oregonian, the previous night the cat’s home caught fire. To keep their three cats safely contained, the owners had placed them in their SUV. Unfortunately, the orange cat tried to hide from the sirens. According to a comment from his owner on Facebook, the “fire trucks really scared him.” The cat managed to scramble inside the car’s dashboard! By the next morning, it was clear that the cat was stuck and in need of assistance. That’s when the fire department called the mechanics. The SUV was taken to the garage and Mark Patrizik, the shop’s general manager, took a look. “You could see his head, but he couldn’t move – he couldn’t even look at ya,” Mark told The Oregonian. Mark decided that the best course of action was to take the dashboard apart.

Mark’s team of mechanics normally takes about four hours to disassemble a dashboard. Because they were worried about the cat, this time they managed to do it in 45 minutes! Mark told reporters “We’re all animal lovers around here, so we just felt so sorry for him. I’ve never seen these guys move so fast.” As soon as the cat was free, they carefully contained him in a carrier to wait for his owners to take him to their post-fire temporary lodgings. Usually taking apart and reassembling an SUV’s dashboard would run around $1,200. When a commenter asked on Facebook what the team charged the family, Mark replied that they didn’t charge the customer anything, adding “it’s the least we can do in that situation!”

Afterward Mark Thomas Motors posted the photos to their Facebook page and shared that their “guys had to put in careful work today after the kitty sought shelter inside a Dodge Journey from a house fire! Luckily Mr. Kitty is ok!” Multiple people from the community expressed their gratitude to the mechanics for helping out the stuck kitty. Every time, Mark Thomas Motors made it clear they were the ones who were grateful to have the right skills at the right time.

It wasn’t just the community who commented. The cat’s owner commented as well! Cyleena Harrelson, the cat’s owner, wrote in response to one of the photos, “I’m so thankful he is ok! …Thank you MTM.” On another photo she simply commented, “Thank you” to which Mark Thomas Motors cheerfully replied, “No problem at all, we were glad to help!”

The shop’s reply to a comment on Facebook seemed to sum up their view: “We <3 animals and were so happy to help.” We bet that cat is happy, too.