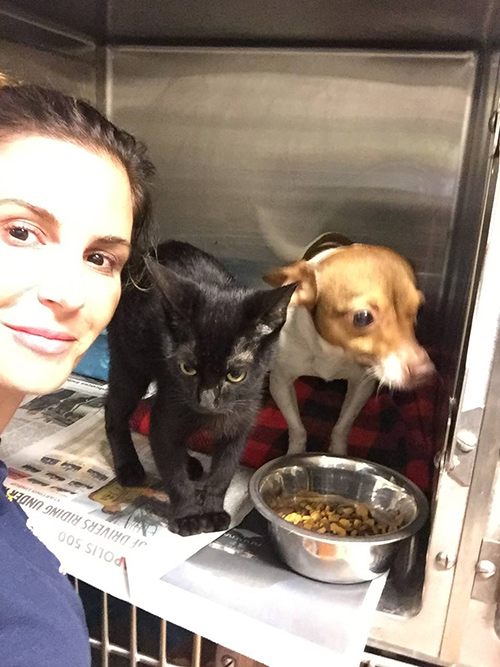 On September 1, the Humane Society of the United States (HSUS) was coordinating with other agencies and animal welfare organizations to rescue as many animals as possible who had been affected by Hurricane Harvey. They received a request to help a Chihuahua and a cat who were stranded in a flooded home. Christopher Schindler and Tara Loller of HSUS’s Animal Rescue Team headed out with Matthew Fortenberry, the director of Beaumont Animal Services.

According to HSUS, the intrepid trio first used a rescue boat to get near the house. Then, once railroad tracks and debris from the flooding blocked the boat’s path, they continued on foot. Once they were able to view the house, it was obvious that the home had been hit hard. The windows were all broken and a fast current of deep water flooded the home.

At that time, a group came by on a narrow boat and helped Tara. As she rode toward the house in that slim boat, Tara later relayed that she was able to hear the “desperate cries” of the dog wanting someone to help. Once in the house, Tara began moving through the waist deep water, searching for the two animals. Chuck later commented on Facebook about Tara’s courage, writing “Tara braved [a] really strong current that was flowing right through the house where we rescued these two!”

Suddenly Tara saw the dog whose cries she had heard from the boat. The white and brown Chihuahua was carefully clinging to the top of a floating sofa. After sniffing Tara, the terrified dog leaped into Tara’s arms. Clinging to Tara’s shoulder it was obvious that the dog “knew she was safe and was not letting go.” During this time, Chris and Matthew had swam through the current and forced the front door open.

After safely placing the dog in a carrier, the trio still needed to find the cat reported to be in the home. They could hear the meows of a cat but couldn’t see where she might be. Eventually they found the kitten hiding in an air pocket in a small area above a closet. Unfortunately, the air pocket that had saved the kitten’s life was too high for Tara and Chris to reach.

The rescuers were undaunted. Tara stood on Chris’s shoulders. Then she stepped onto one of his hands so that he could literally toss her into the small area above the closet. Tara was covered in insects and flat on her belly in the small space. However, uncomfortable as it was, Tara was able to reach the frightened kitten and hand her down to be placed in a carrier! Now that the two pets were in carriers on a boat, it was time to bring them to a safe, dry place where they could rest until their family could be found.

It’s not known how long the animals were hiding in the flooded home, but after their rescue, the small dog and kitten were brought to safety at the Beaumont Animal Shelter, where Tara posed with the two pets she’d saved so dramatically. When that photo was shared on Facebook, Wayne Pacelle, President and CEO of HSUS, praised the team, calling Tara and Chris “Life savers,” and noting that he is “so proud of [them] for this extraordinary effort.” Other commenters echoed the praise, referring to the team as “fearless heroes” and thanking them “for caring and saving” the pets.

Hurricane Harvey was horrible and the rescues are still on going. However, it’s because of compassionate animal lovers that pets like that kitten and Chihuahua are able to be saved. We bet that there’s nowhere else Tara and Chris would rather be, and nothing else they’d rather be doing than saving sweet pets and helping families separated by the fast floodwater.