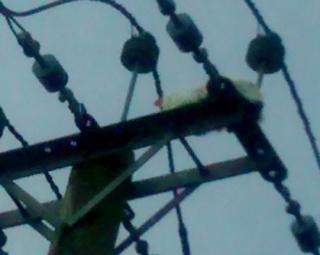 According to Kent Online, a five-year-old black and white cat had become stuck on top of a 30 foot electrical pole in September. Thankfully, an alert passerby noticed the cat and called the local RSPCA who then coordinated a rescue with engineers from UK Power Networks: Mark Stevenson, Andy Reeves, and Mark Chittenden. Tina Nash, a local animal welfare officer, told reporters that the “poor cat had been stuck on the pole for a number of hours.” She continued, “I’m not sure why he ended up on the top of it, and this was an extremely hot day.”

Tina described the engineers as “brilliant” and described the rescue to reporters, “they turned off the electricity then used their cherry picker to get near the cat. They approached him very slowly and calmly and made him feel at ease, even though at one point the cat started to walk along the wire like a tightrope.” We can imagine that the gathered crowd all had their hearts in their throat at that point! Mark Stevenson confirmed for reporters that everyone down below become nervous when the male cat began to move along the electrical line. Thankfully, before he had gone up in the cherry picker, the RSPCA had given Mark some food to help tempt the cat.” According to Tina, “The engineers persevered however and managed to get him. They handed him to me to be checked over, and despite being stressed there was no harm done [to the cat].”

Now the RSPCA is seeing if they can find the cat’s original home. Although he wasn’t microchipped, they have posted his information to see if anyone steps forward. Thankfully, according to Tina, “the caller who contacted the RSPCA actually took him [in] and offered to give him a [permanent] home if no owner comes forward.” She added that offering to take the cat in was “really lovely of them.” Of the black and white kitty, Tina summed up the cat’s day with the following, “He really is one lucky cat given the predicament he was in.” He’s definitely a lucky cat to have caught the eye of such a compassionate group of people!