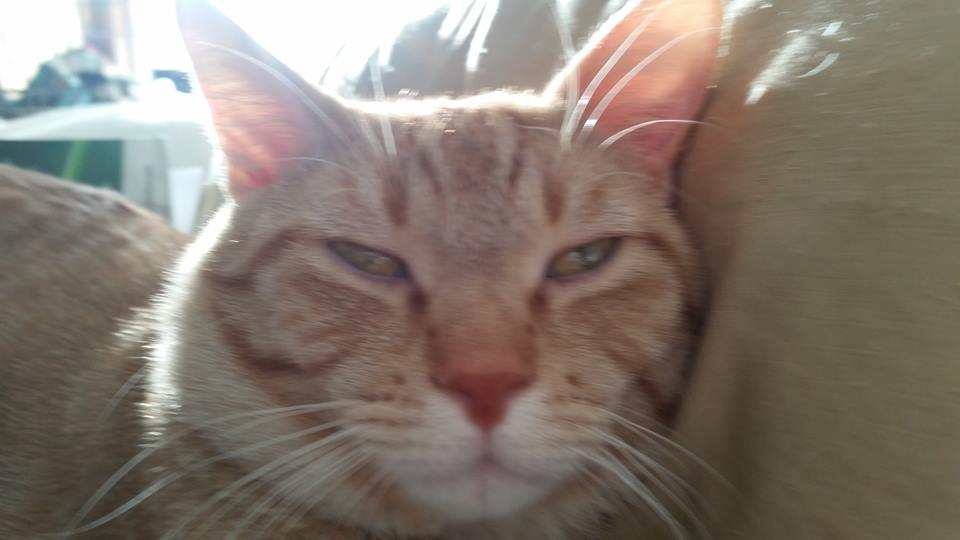 We recently received this message from Tracie Anderson in Minnesota about a cat named Slim:

“Slim is a feral orange tabby cat. He is 9 months old now. He was hurt in August 2017 and I saw it all happen. He got banged in the head right in the left tear duct. He howled so badly. I ran and quickly picked him put and help him to my chest and started praying. I could tell it was a significant brain injury. Three days I held him, only putting him down to go take care of the rest of the animals here at Triangle Acres.

Slim’s chances were slim. But that is not why he is named Slim. He is a slim physique as well. The vet just told me to be patient, if he didn’t improve in 4 to 5 days then he advised me to bring him back and humanely put him down.

Slim fought the first 3 days. He was fed canned cat food watered down. Dropper for water to give him water. His head swelled up but not as bad as the vet thought. He had tons of seizures and body tremors.

Day 4, I was dead tired from staying up the past 3 days. I picked him up gently and held him and kissed his head carefully. I asked him what he thought and he meowed and gave me a bit of a purr. When the vet saw him he said he was surprised he was still alive. He examined him and said the swelling was slowly going down but it appeared Slim couldn’t see anymore. The vet just said keep moving forward. Help him eat, teach him to eat whatever I could do. So I set up a pen for him and we started learning to do things over.

Day 30 Slim was walking but held his head to the left and walked in circles and clearly had a handicap we had to work through.

The vet was amazed but yet guarded. I hadn’t seen a seizure for a long time, but when I am sleeping and working with other animals, I don’t see everything. He was eating, but not dry cat food well. So after voicing my concerns about his weight not advancing and his coat being so rough I wondered what to do. The vet didn’t have any ideas either. Plus it seemed Slim was having a hard time with another canned cat food – processing it. So I started to look for a different food. I came across Halo® on an Amazon Daily special and ordered a case. Slim went nuts over it. It took about three weeks of Halo chicken canned cat food before I really started to see a difference. But he started becoming more active and his coat was softening. And he was doing much better processing the food too. We tried the dry food, he likes it, but he just can’t crunch it well.

Today it has been about five weeks since we started Halo- goodness its spendy! Slim eats 2 full cans and shares another can. I put the old ladies (3-17 year old sisters whose health is failing now) on HALO as well. Slim races around his room and leaps with abandon. Actually I noticed this past week he has been gauging heights of the furniture in his room and has been clearing them just fine the past couple days.

Yes Slim is still blind. We think, the vet and I, that he has partial sight, but it would be the angled at the ground. He follows toys on the ground, but not in the air level with his head. So we know he sees something.

Today was a surprise and a first. Slim leapt into my arms. He’s been studying the height of my knees when I sit down for almost a week. He made a clean jump and I was able to catch him.

I don’t know if I would have found another cat food, I am just glad Halo is what he goes nuts over and what has helped him come up in health and I don’t mind the poop end of things either. Much easier to tolerate.

Jazz is a new kitty about 3 months old that was rescued from the cold. Jazz had 3 siblings and a neighbor brought one of his siblings over to me when it started to get cold out. They were about 5 weeks old at that time. The sibling that was brought to me did not make it, it had been cold too long and I couldn’t get it warmed up and couldn’t get it to take milk. The other 2 siblings we hunted for, but couldn’t find the same afternoon. Jazz showed up in my barn that evening. He was in between 5 other cats- they were blanketing him in a circle of fur. Cats are intelligent. However, I knew if they scattered, Jazz wouldn’t make it. So I grabbed Jazz and brought him inside. Jazz now resides in the same area of the house that Slim does and Jazz is now on Halo, too.

It’s a good cat food. Slim is living proof of how good it is. The improvement of his overall health and his coat speaks volumes.

If I were rich I would buy stock, lol.

I just wanted to share Slim’s story. If we hadn’t stumbled on that Amazon deal, I am not sure where we would be today. Thankful we stumbled on it.” Thank you Tracie for sharing your story and we are happy to hear that Slim and Jazz are doing well on Halo!