Sia and Me and the Dog Film Festival 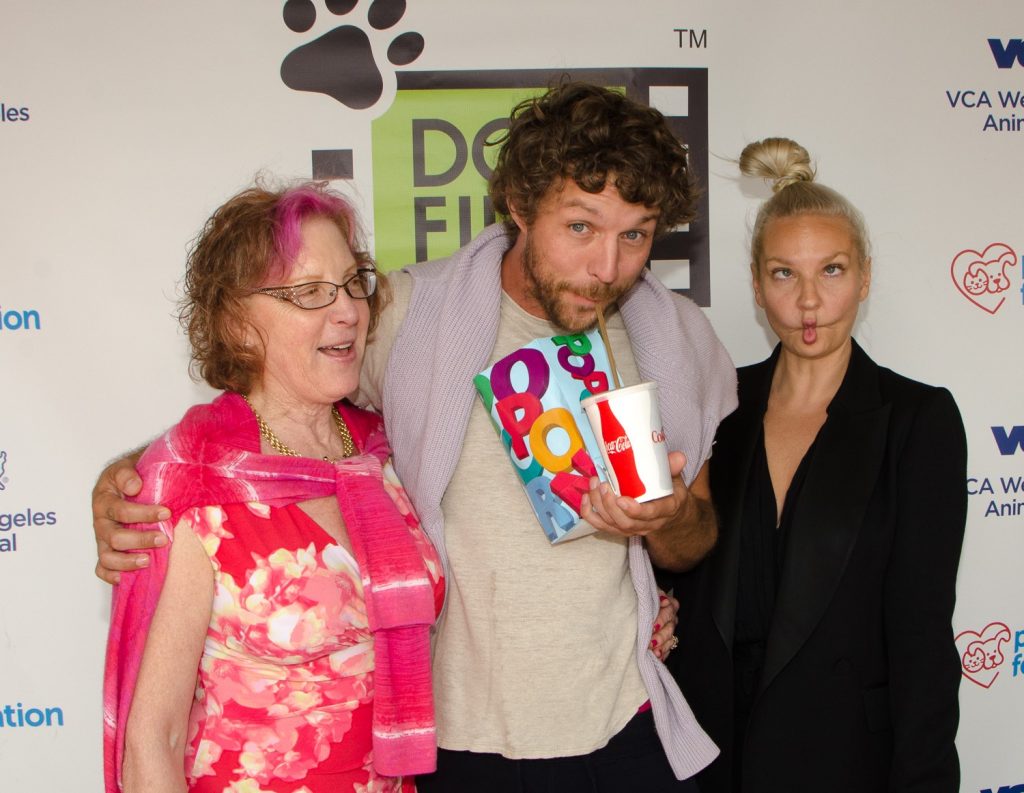 This past weekend, the Sunday New York Times Arts & Leisure section ran a big piece about the singer/songwriter Sia, and her compelling integration of dancers into her videos and performances, as she embarks on a huge national and international tour with her troupe. The article explained the uniqueness of her talent as both songwriter (for some of the biggest names in rock and roll) and as a performer, including her embrace of anonymity, remaining incognito both in performance and in the outside world.

Reading the article made me realize how incredible it was that our shared love for dogs caused Sia to introduce herself openly to me at the popcorn counter at the Crest Theater in Los Angeles, where I was showing my Dog Film Festival back in June. The theater had graciously allowed people to come with their dogs and the atmosphere had been faintly euphoric as everyone experienced the dog-crazy forbidden delight. Sia had no way of knowing that my ignorance about contemporary music made her absolutely safe from the celebrity-crazy reactions she goes to great lengths to insulate herself from.

During the films I was in the lobby. A sweet-faced lady with a blonde top-knot was munching popcorn with a handsome bearded gentleman, I came over to see why they weren’t inside watching. “This is so great,” she said with a mild Australian accent. “It’s wonderful.”

“And half the ticket price goes to the two rescue groups — the Lange Foundation and Downtown Dog Rescue And Halo Pets is giving each of them 10,000 bowls of food too!” She nodded enthusiastically.

Then I added, “But you’re missing some of the films.”

“That’s okay,” she said, “I just wanted to experience this. My husband got me the tickets as a surprise. He said, ‘What are your two favorite things?’ And I said, ‘Dogs and TV.’ He told me, ‘That’s very close.’ It’s fantastic that you did this! I’m going to promote it to my followers.”

She asked for the hashtag and I showed her a sign I had put up on the theater wall. She took a picture of the hashtag with her phone. I thought that was incredibly sophisticated (which shows how much of a Luddite I am).

“Wow. How come you have that many?” I asked, wondering if she was making it up.

“Because I’m a famous singer.”

“I’m so sorry for not recognizing you,” I said, wondering if she was making that up, too? “I don’t follow anything that isn’t about dogs these days! ”

“Nobody recognizes me. I perform with my face covered.”

“Seriously?! You’re so pretty, that seems a shame. How come?”

“It allows me to come here, do this — it keeps me safe and sane.”

“Good for you. I think that’s brilliant.” And I really did think it was pretty cool to be a rock star who didn’t want to be a star. Safe and sane. And a passionate dog lover. “Hey, I don’t suppose you might have a song about a dog that I could use in the festival? My friend Sophie B. Hawkins song “My Best Friend” is in the Festival now.”

“I did write a song about Lentil. A dog I had to leave behind in Australia. You can talk to my manager, David, about using it.” She wrote down his name and email address on a slip of paper. And she said she’d be a guest on “Dog Talk.”

When I got home I did correspond with David and he said we could discuss licensing one of her songs for the festival — which gave me a clue that there would be a lot more money involved than I had any idea. The article in the Times said Sia had millions of hits herself and for many huge name stars. “Lentil” was probably going to be out of my price range! But he would arrange a radio interview with her when she got back from her big tour overseas.

My dear friends who are a decade older than me but huge music lovers began singing Sia’s big hit “Chandelier” the minute I told them this story. The college student volunteer who was helping check people in at the Crest Theater began to cry when I told her Sia was right there — she immediately played a song of Sia’s on her phone from “The Voice” and said how much Sia’s music had gotten her through tough times.

So I turned out to be the perfect person for Sia: I loved dogs at least as much as Sia did, yet I was clueless about her accomplishments and no threat to her desire to be treated like a normal human being, instead of the distorted and destructive reaction celebrities usually receive. It was a beautiful surprise for both of us. And who knows, maybe she’ll loan me one of her songs for the Dog Film Festival next year??