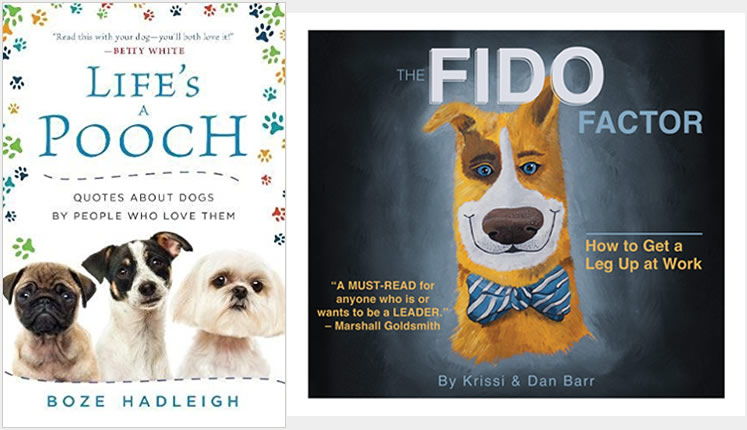 This week I wanted to bring two very different books into the limelight – because they show the broad range of the ways in which dogs inspire and delight us, in real life and on the page.

Boze Hadleigh’s delightful book “Life’s a Pooch: Quotes About Dogs By People Who Love Them” is chock full of  hundreds of celebrity quotes and anecdotes about what dogs have meant to them. The book embraces many aspects of the human-dog bond and explores our furry companions’ sometimes baffling world, while celebrating their impact on ours. Those quoted range from famous animal advocates like Betty White, Doris Day, and Martha Stewart – to Leonardo da Vinci and Leonardo DiCaprio. There are quotes from actors who co-starred with Lassie as well as singers, Presidents, and Walt Disney.

“The Fido Factor: How to Get a Leg Up at Work” by Krissi and Dan Barr, is a leadership book written by Krissi Barr with her husband, Dan. The book is written from the perspective – and with the expertise – of a business coach,whose consulting firm Barr Corporate Success, has a 15 year track record of working with executives and business people to help them reach their full potential. The practical advice for success draws its inspiration from the simple and clear way that dogs live their lives.