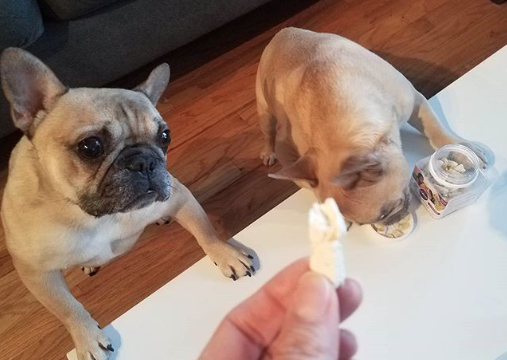 I’m starting a little summer series of  “myth busters” about the way we misunderstand our dogs and cats, unwittingly applying human-type emotions and desires to animals, who are actually cut from a different piece of cloth than we are.  I hope these will serve as little reminder “taps on the shoulder” to us that we should respect other species for who they are, both as different mammals from us, and also as individuals.

Myth #1 – Dogs enjoy sharing the way people do.
Some of us like to think that our dogs are happy to share with other dogs. Share our love and attention. Share their toys. Share their sleeping places. Share their hunting spots. Share the back of the car. Share the prime spot on the sofa. Even share their treats and dinner!  Really!? We encourage sharing. We like to think that “share and share alike” is a positive quality that we can imbue in our dogs, even if they don’t come to us ready to embrace the concept. We expect dogs to share, we’re delighted when they seem to, and we even get annoyed if they don’t. (We’re a little unrealistic in believing that sharing is natural for people, too – but more on that below!)

It isn’t logical for dogs to share
Without specific scientific evidence close at hand, I’d have to say that it is rarely true that a dog willingly shares her valuable assets with another dog. Why would she? Where will that get her? “Survival of the fittest” is still at the root of it all, isn’t it? On a primal level, how would a dog survive as an individual – beginning with her littermates – if she always gave up her turn at the “milk bar” or the toy bin to those who wanted it more?  That’s technically called the runt of the litter! What creature has an innate desire to wind up at the bottom of life’s totem pole…which in the cold, cruel world of the animal kingdom is sort of where “sharing” gets you!

Hang on! But I’ve seen dogs who share and take turns
Yes, I’ve seen those dogs, too. My own dogs! But it doesn’t happen naturally or without constant and firm intervention. I actually raise all my dogs to share – and most of them join the family at random times in their lives from Weimaraner rescues, so who knows what their backgrounds were? Sharing happens because I play refere: “You wait: it’s Wanda’s turn to lick that pot, you’re next,” or “Let Maisie get on the bed.”

An exception to the not-so-quick-to-share can be when dogs have grown up together and developed “an understanding.” Most likely this is is simply a hierarchy in which one dog has evolved as the “top dog” so both dogs proceed on the assumption that “what’s his is his, and what’s mine is his, too!” That can look like sharing.

Wait! Do people actually share freely with others?
If you think that dogs should share the way people do, you clearly haven’t seen the vocalizations or physical expressions of indignation that can be expressed by toddlers (or older) whose snack or toy is under siege from someone else. Not to mention grown adults trying to get online at a wedding buffet or get a seat on the subway!

When dogs have high value treats or food they really love it can create an even greater reason not to share (my girls adore their Halo food – the kibble, but also the canned Spot’s Stew – so I’m extra careful to feed them at a distance from each other since Wanda eats a whole lot faster than Maisie).

Real Life Vs. Wishful Thinking
Sharing is a concept that might look good on paper, but in a dog’s real life (or ours) it doesn’t come naturally. Teaching a dog to share requires negotiation, patience, persistence and even the offering of bribes or recompense by referees  (like Halo’s Luv-a-Lots). For true harmony between dogs, you’re probably best off supporting the idea that each one gets his own stuff and his space is universally respected as his own.