HALO PETS CUSTOMER, JEANIE THE 3-LEGGED DOG, HAS HER OWN CHILDREN’S BOOK 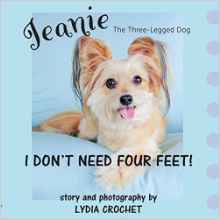 Long-time Halo Pets customer, Jeanie, is the star of her own children’s book, “Jeanie the 3-Legged Dog; I Don’t Need Four Feet”, in which she shares a powerful message of courage and acceptance.

It’s a heart-warming tale for dog lovers of all ages, reminding readers that anything is possible and it’s okay…even cool, to be different.

Born with a deformed front leg, vets removed Jeanie’s leg when she was very young, shortly after being rescued from the streets. She is now an advocate for other rescues with special needs, who are usually the last to be adopted.

A portion of the proceeds from her children’s book will be donated to local rescue operations in Jeanie’s home state of Louisiana.

Jeanie is also a therapy dog who once saved her cockatiel friend from a hawk attack and was even featured in the 2015 Petco Foundation calendar representing April.

We are so proud to have Jeanie as part of the Halo family and admire her hard work to bring awareness to pet adoption.